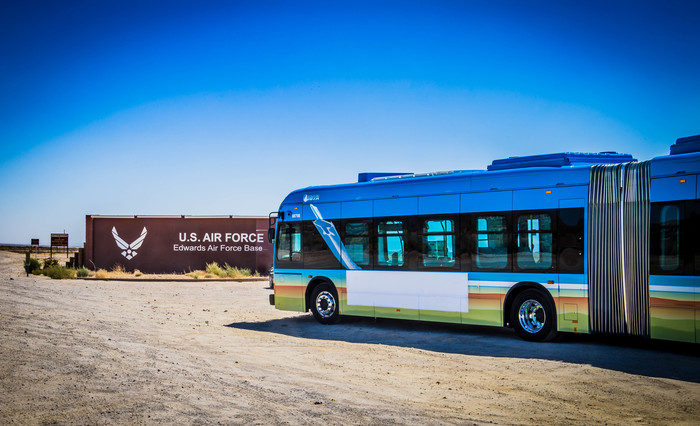 Lancaster – The Antelope Valley Transit Authority (AVTA) will begin bus service to Edwards Air Force Base on Tuesday, January 22nd, the first in a planned rollout of new commuter routes serving aerospace employers throughout the Greater Antelope Valley Region. For the first two weeks, until February 1st, AVTA is offering free rides on the new Route 747, in an effort to encourage everyone to try out the new service and enjoy the free WiFi service, comfortable ride, and skip the long entrance lines at the base. The agency is certain that once riders see the many benefits of commuting on the bus, the new route should prove to be quite popular.

“We are very excited to be starting this service to Edwards Air Force Base, providing base employees with an environmentally friendly mobility option to them that is also cost-effective," said Lancaster Vice Mayor and AVTA Board Chair Marvin Crist. “We are honored to be working with the men and women who serve our country, and we look forward to a long and fruitful relationship with Edwards Air Force Base leadership.”

Riders will begin paying regular fare on February 1st, and with over 10,000 personnel working on base, riders will have a variety of fare options to choose from. Full-time employees may opt for a monthly pass at $175, while those visiting Edwards on a limited basis might only need a 10-trip pass for $45. The monthly pass will also be valid on all of AVTA’s local bus routes at no extra cost, and on all commuter routes traveling south on the 14 freeway for a small upcharge. Complete information on all of AVTA’s local and commuter routes and fares may be found at www.AVTA.com.

“The expansion of our commuter services to serve our local aerospace employers will benefit both the employees of those organizations and the Antelope Valley as a whole,” said AVTA CEO Macy Neshati. “There is great potential in decreasing traffic in those areas, resulting in faster commute times for everyone trying to get to and from work. The interest from all levels has been so great that we are already looking at future bus routes to other parts of Edwards Air Force Base, as well as Mojave Air and Space Port and Plant 42.”