Our Zero-Emission, All- Electric Fleet

The Antelope Valley Transit Authority (AVTA) is bringing a fresh new energy to public transportation in the Antelope Valley!  In 2016, The Board of Directors for the Antelope Valley Transit Authority (AVTA) set a goal of becoming the nation’s first fully electric fleet, converting all of the agency's aging diesel buses to a 100% battery electric bus fleet with up to 85 new all-electric buses.The board’s decision provided the agency with clear direction and sent a strong message that AVTA is serious about its intent to be all-electric.

On March 16, 2022, the Antelope Valley Transit Authority Board of Directors, along with the California Air Resources Board (CARB), hosted a celebration recognizing AVTA becoming the first all-electric transit agency in North America. Antelope Valley Transit Authority received their 20th electric MCI coach for their commuter routes. The addition of these buses to AVTA’s fleet of BYD zero-emission buses, enables the agency to place into service a 100% zero-emission transit fleet.

View AVTA's Journey to Electrification through a digital commemorative flipbook or watch the video here.

The journey to electrification did not happen overnight. It arrived through many steps taken by the staff of AVTA as they fulfilled the vision laid out by their Board of Directors. 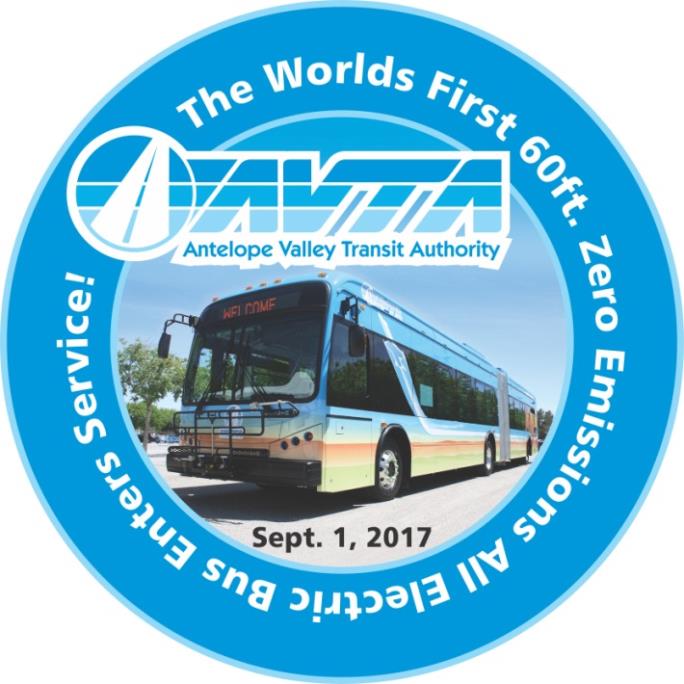 In February 2016, the AVTA awarded Lancaster-based BYD a $79 million contract to purchase up to 85 electric buses over the next five years. The first order was for 29 electric buses, and included 16 45-foot commuter coaches and 13 60-foot articulated buses. This initial phase of the Electric Bus Fleet Conversion project was funded through a $24.4 million grant awarded to AVTA from the CalSTA, plus matching AVTA and federal funds of $15 million. On September 1st, 2017, AVTA made history by becoming the world's first transit agency to operate a 60' all-electric articulated bus in revenue service!

Charging infrastructure was another major component of the project, which uses high-power wireless inductive chargers to help power the zero-emission buses. These chargers allow the electric buses to charge wirelessly simply by driving the vehicles over charging pads embedded into the ground. The first of these wireless inductive charging stations was completed at Sgt. Steve Owen Memorial Park (OMP), one of two major transfer centers in the AVTA service area. The station became operational on January 5, 2017. Construction of a second charging station, located at the Palmdale Transportation Center, was completed in the Fall of 2017.

A Request for Proposal was issued by the AVTA in April 2016 to acquire equipment for up to 15 wireless charging stations with a minimum requirement of 200 kWh. A charging station of this strength has the potential to add approximately 14 miles to the range of an electric bus for every 10 minutes of charge time. The wireless charging technology is one of the most exciting aspects of this program as it relies on an inductive charging system that simply requires a bus to park on top of an electromagnet during its recovery time in order for the wireless charging to occur. As a result, zero emission buses can remain in revenue service as long as their diesel counterparts. When not in service, the electric buses charge their batteries at AVTA via hard-wire conductive charging stations. Installation of the 87 charging stations was completed at the end of 2017, and includes a 1.5 megawatt backup generator, which can power the entire charging infrastructure in case of an emergency.

AVTA’s Journey does not end here. Already the AVTA Board has started the process of building a solar field coupled with battery storage that will enable AVTA to charge their battery electric fleet with 100% solar energy, further reducing the agency’s carbon footprint.

AVTA’s journey to electrification should inspire and challenge other agencies across this nation. What AVTA has done can be repeated.